The works of Isambard Kingdom Brunel at Briton Ferry Docks

In 1846 a company was formed to establish docks in Baglan Bay at Briton Ferry, near the mouth of the river Neath; but nothing was done until 1851, when the necessary powers were obtained under an Act of Parliament. From the vicinity of the proposed docks to the South Wales and Vale of Neath Railways, a large amount of trade was anticipated; and in 1853 an Act was obtained for the South Wales Mineral Railway, which was intended to terminate at the docks, and was expected to bring a large traffic in coals and other minerals.

The dock works were begun soon afterwards, but the earthwork was not completed, nor the construction of the gate commenced, until the year 1858. The docks were completed, after Mr. Brunel's death, by Mr. Brereton, and were formally opened on August 22, 1861.

They consist of an outer tidal basin of about 7 1/2 acres, and an inner floating basin of about 11 acres, with a depth of water of 27 feet at spring tides, and 16 feet at neap tides. The two basins are connected by a passage or entrance of 50 feet in width, with curved battering walls and an invert, closed by a gate of a single leaf. An important advantage of single gates is that the sill and quoins may be in one plane, and that the troublesome and costly fitting of the hollow quoins is avoided. The sill was laid 6 feet below what was then the low-water level, as it was thought that future improvements might reduce the bar at the entrance of the river Neath to that level. This has already been nearly accomplished The total length of the docks is a little over half a mile, and the average breadth is about 400 feet. They are connected with the South Wales Railway by branch railways.

With the exception of the walls dividing the two basins near the entrance gate, the sides of the dock are not constructed with masonry quay walls, in the ordinary manner, but are formed in a very inexpensive manner of slopes pitched with furnace slag, obtained from the copper smelting works on the Neath river, with jetties at intervals for the shipping. Besides being suitable for the soft clay in which the dock is made, this plan is specially adapted for mineral traffic, as the work of loading or discharging a cargo of minerals can only be properly carried on at the point where fixed machinery is provided for the purpose. This machinery may be placed as conveniently on projecting jetties as on a dock wall. The traffic, which consists mainly of coals and metals, is accommodated at the jetties, which are furnished with cranes for loading and unloading the vessels employed in the metal and iron ore trade, and with tipping-frames, which discharge the coals into the ships. These cranes and tipping-frames are worked by hydraulic machinery.

In order to facilitate the entrance of vessels from the river Neath to the tidal basin, and to protect it from the sea, two pier-heads were built, one at each side of the basin at the point where it joins the river. These piers are of timber piling and framework, filled in with copper slag; the entrance between them is 300 feet wide. They were constructed after Mr. Brunel's death. 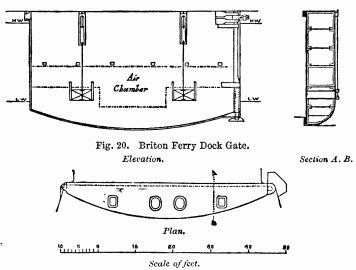 The air-chamber, which is similar to that of the Plymouth gates, is placed so that the top is at the level of high-water neap tides, about half-way up the gate.

There are two sluices at low-water level, each having an area of 8 square feet.

The entrance invert being subject to the influx of sand from the outer basin, and to the deposit of coal rubbish dropped into the dock, Mr. Brunel decided in this gate not to use wheels, but to make the hinge and heel-post strong enough to carry the whole weight of the gate, even if it were unsupported by the buoyancy of the air-chamber.

The heel-post is a massive piece of cast iron; the bottom part is bored out, and into it is fitted a cast-iron cylindrical pin, 1 foot 6 inches diameter and 7 feet 6 inches long. On this are ground discs of steel, lubricated with oil, whereon the gate rests and turns. Thus the surfaces exposed to friction are above the sand or grit at the bottom of the dock. The lower end of the pin fits into a cast-iron socket fastened to the masonry, and is prevented from turning round by being made hexagonal. The sides of the hexagon have sufficient play to enable the gate to adjust itself, when shut, to the masonry sill, so as to be water-tight. The top of the heel-post works in a brass bush, 18 inches diameter and 15 inches broad, enclosed in a massive wrought-iron collar, which is strongly fastened by anchor chains to the masonry. After the gate was completed the strength of the hinge was tested by moving the gate before the water was admitted into the dock. The only resistance to the motion of the gate is the slight friction at the hinge.

No coffer-dam was used in the construction of this work, but advantage was taken of a large bank of slag and earth enclosing a portion of the site of the dock. This was extended and raised, and a sea dam formed. The dam was cut through when the works were completed, and a channel dredged to the depth of 6 feet below low water.

In the 1850s the Briton Ferry Floating Dock Company was incorporated, and bought land from the Earl of Jersey to build the Briton Ferry Docks.[4] When it opened in 1861, the dock consisted of an outer tidal basin, and an inner floating dock, where the water level was maintained by a single gate, which included a buoyancy chamber. It covered an area of 23.7 acres (9.6 ha). The gate was 56 feet (17 m) wide, and the unique structure with its floating caisson was designed by Brunel's father, Sir Marc Brunel. Following Brunel's death in 1859, Robert Brereton took over as engineer, and also acted as engineer for improvements made in 1872 and 1873.

The company later went bankrupt and the Great Western Railway took over the docks as a going concern. After World War II many warships were scrapped there, until the dock was closed in 1959. As part of a regeneration programme, a tower, which formed part of the complex, has been refurbished. It was an accumulator tower for the hydraulic system which operated the dock gate and cranes. The system was designed by William Armstrong, and in 2010, the Institution of Civil Engineers unveiled a plaque at the site to commemorate the 200th anniversary of his birth.

The shipbreaking of WW2 ships, for example HMS Bermuda, took place at Giants Grave upstream of the floating dock, and north of the M4 and A48.